No matter where you look right now in Costa Rica it seems that there's work being done on the highways.  Long noted for having some of the worst roads in the Americas, Costa Rica has been working very hard to change its reputation for having bad roads.  On my recent trip hosting discovery tours in early December I had some time on my hands and did some highway touring and here's my report.  Background information:  MOPT is the name of the agency responsible for the roads in Costa Rica and there is both a website and phone number you can call to check on daily road closures, delays, etc. 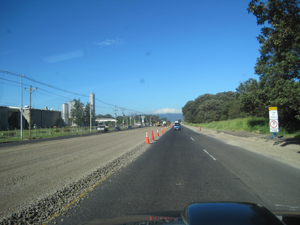 The Pan American highway (InterAmerican Highway) Known on many maps of Costa Rica as route C1.  This highway starts at Paso Canoas at the border of Panama and goes north to the border of Nicaragua.  The main section of this road as it passes through San Jose is named the General Canas highway.  South of San Jose it is known as the Cerro de la Muerte (mountain of death).  This road passes along the ridge of the Cordillera Talamanca, reaching over 11,000 feet above sea level in some places.  As of December 2011 MOPT is busy widening this road to four lanes just west of San Jose. 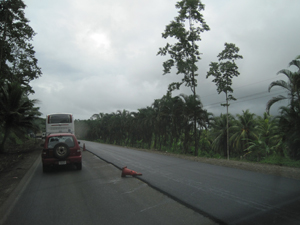 Route 32 - Know as the Limon Highway, this road connects San Jose to Limon and Moin on the east coast of Costa Rica and the Caribbean Sea.  Much of this road passes through the national park Braulio Carrillo, dropping nearly 9,000 feet as it winds from the Talamanca mountains just east of San Jose to the lowland Andian slope.  As of December 2011 much of this road was newly paved and active paving was going on in 6 locations between San Jose and Limon.  Here is a section being paved by Sarapique.  They were also paving east of Moin and around the Guapiles area.

Route 27 - Know initially as the Aguacate trail but now having been replaced by the new Caldera Highway toll road built by Autopista Del Sol, this road is still undergoing road work aimed at water management on the steep road cuts primarily between the towns of Orotina and Atenas.  This road is privately maintained.  As of December 2011 there was active work being done on the road cuts and cunettas (gutters) to help improve water management during periods of heavy rain.

The Costanera Highway - This road travels the coast connecting the city of Puntarenas and Caldera to both Palmar Sur and Palmar Norte.  It is an extension of route 34 but is known locally only as the Costanera highway.  As of December 2011 there was active paving between the towns of Jaco and Parrita.  Sections south of Quepos to Dominical were only recently completed, connecting the coastal highway as an alternative for traffic heading from Panama to Nicaragua and points north and has now become more of a truck route.  Change has both good and bad aspects, new roads bring new truck noise.