Bullfighting in Costa Rica - Or should I say Bull Riding?

If you happen to be in Costa Rica at the right time of year, a fun thing to do is going to the "bull fights".  Unlike most bull fighting in other countries, Costa Rican bull fights do not harm the bull.  On the contrary, you are most likely to see damage to the bull fighter.  Local cattle ranches provide the bulls for free.  There is a makeshift stable set up with a bunch of bulls that have been gathered from their typical free range fields for this once a year event.

We had our first experience years ago and Kristina and I climbed into one of the make shift  but permanent bull rings found in many cities and towns.  There is a ring in Ojochal, full of weeds except for one weekend a year.  We were there to see Las Corridas a la Tica, Costa Rican Bullfighting.  I was surprised to see the ring full of younger men, between 15 and 25 toreadors (bullfighters) wandering the ring in wait of the bull, as well as a few on horseback.  Some had capes while others had short sticks and tin pans.  I thought that this didn't seem very fair to the bull.  During the festivities the area around the ring fills with food vendors, musicians arts and crafts exhibitors and rides and entertainment for the kids.

The announcer introduced the first bull fighter and the crowd waited in suspense.  The first bull fighter (loco) appeared in the ring RIDING THE BULL.  He had no saddle, just a short rope to hang on for his life.  Within a few seconds, the bull had ejected the rider and then tried to stomp and gore the rider as well as anything else in its way.  I've never seen people get out of a ring so quickly as the other men (locos) in the ring attempted to keep the rider from getting gored or trampled, as well as themselves.  The bull had other plans and managed to quickly empty the ring of all but the few horseback riders, whose job was to corral the bull out of the ring to ready the ring for the next victim (I mean rider).   Occasionally the promoters would release a half dozen bulls into the ring when things were slow or the toreadors started getting cocky.  Those bulls could clear the ring in six seconds flat.  Watching grown men swan dive over 5 foot high cattle fencing is a sight you rarely see.

I turned to the person sitting next to me and commented that they must get paid a lot of money to do this.  Nope, no money was his answer.  There must be a great prize I said next.  No prize was the reply.  Why would anyone risk their lives riding a 1400 pound angry bull I asked?  He pointed to all the woman perched around the ring and explained to me that this is a right of passage to the best girls in town.

A new law requires that all participants must be sober.  One has to ask why a sober person would do such a thing!  One bull came out of the gate and just wandered around.  The toreador rider tried to incite the bull but it just kept walking.  He finally got off and made the walk of shame while the crowd cat called and whistled.  That's the bull I want I thought.

We watched four or five more riders and got to see the Red Cross in action.  We won't let our workers ride either.  The Red Cross volunteers their services for the event.  They had set up a triage unit for the not so fortunate riders and ring runners.  We finally had to leave the ring after seeing the bull find another unfortunate play toy, tossing a toreador across the ring like a straw doll.  As we walked around the festival outside the ring, we occasionally heard the crowd groan, indicating that the bull had won another round.

Don't miss this annual event if you have the chance but do try to avoid getting on the bull... 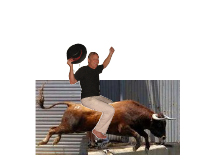