The new Autopista Del Sol has some Growing Pains

Last Sunday the new toll road from San Jose to the west coast was closed shortly before noon due to a number of issues with rocks in the road from the heavy rains.  Although the company responsible for building the road, Autopista Del Sol, claims the road is fine, they have agreed to temporarily close one section of the road, between Orotina and Atenas, totaling about 12 miles.  The missing section means you have to use the old "aguacate" highway through a stretch through the mountains.  Though we have used this road for many years to reach our properties, our Discovery tour groups would prefer using the new highway rather than winding through the mountainous stretch we are again traveling, adding 45 minutes to our travel time. 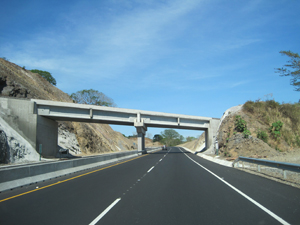 The new highway was closed after a female motorcyclist struck a rock and was killed on the old road.  The department of transporation then decided to close the road for repairs to the steeper sections subject to rock slides as the new road enters it's first rainy season.  Had the road been built by the Costa Rican department of transportation, they would have simply cleared the road of debris after each rain and re-open it.  Case in point is that there is a similar highway going to Limon on the eastern slope of Costa Rica that was built and maintained by the department of transportation.  This road has numerous slides and was closed this past week when nearly three feet of stone and earth slid and blocked passage along one stretch of the highway.  This stretch has had a number of slides in the same location yet the road is reopened each time after the debris is removed.  We even had a small slide on the coastanera highway this past week but within less than a hour, the debris was removed and the road was as good as new.  Small rock slides are to be expected in a country with four mountain ranges and steep road cuts through the mountains.  Though the new highway is temporarily closed, demand for Costa Rica real estate in our developments is at an all time high.

I spoke to an employee of Autopista Del Sol, the Spanish company that created the new Caldera highway that is now closed, and they assured me that the road is not dangerous and that the road has been cleared and ready for travel for nearly two weeks now but they have agreed to close it at the request of President Laura Chinchilla.  I was told that the government has requested a 2 month closure while the initial heavy rains frequently found at this time of year test the stability of the steep embankments that flank the new highway.  In reality, the old aguacate highway which we are again using as an alternative is much more dangerous than the new Caldera highway even with occasional rocks sliding.  Last week there was a fatal accident on the aguacate that took the lives of three.  But politics sometimes outrank good sense.  The new road is cleary the best highway in Costa Rica and it is the people of Costa Rica who are suffering without use of this great engineering achievement.  Tourist sites, hotels, restaurants, realtors and developers are frustrated as the road closure has temporarily decreased traffic to the central and southern regions.  Our discovery tours to view lots and real estate in our developments has so far not been affected.  It does add a bit more time to our drive to the southern region in the interim.  For more information about our developments and how to visit, lot prices, etc, see www.PacificLots.com.  We offer the best Costa Rica real estate values in the country.